If you want to start an argument, ask the person who just said ‘paradigm shift’ what it really means. Or ‘epigenetic’. Nature goes in search of the terms that get scientists most worked up.

Why so? Here is how ‘paradigm shift’ first came into science, and for which Dan Graur wants to posthumously put Thomas Kuhn to trial.

Paradigm shift has a definite origin and originator: Thomas Kuhn, writing in his 1962 book The Structure of Scientific Revolutions, argued against the then prevalent view of science as an incremental endeavour marching ever truthwards. Instead, said Kuhn, most science is “normal science”, which fills in the details of a generally accepted, shared conceptual framework. Troublesome anomalies build up, however, and eventually some new science comes along and overturns the previous consensus. Voil, a paradigm shift. The classic example, Kuhn said, is the Copernican revolution, in which Ptolemaic theory was swept away by putting the Sun at the centre of the Solar System. Post-shift, all previous observations had to be reinterpreted.

Kuhn’s theory about how science works was arguably a paradigm shift of its own, by changing the way that academics think about science. And scientists have been using the phrase ever since.

The use of the term in titles and abstracts of leading journals jumped from 30 papers in 1991 to 124 in 1998, yet very few of these papers garnered more than 10 citations apiece1. Several scientists contacted for this article who had used paradigm shift said that, in retrospect, they were having second thoughts. 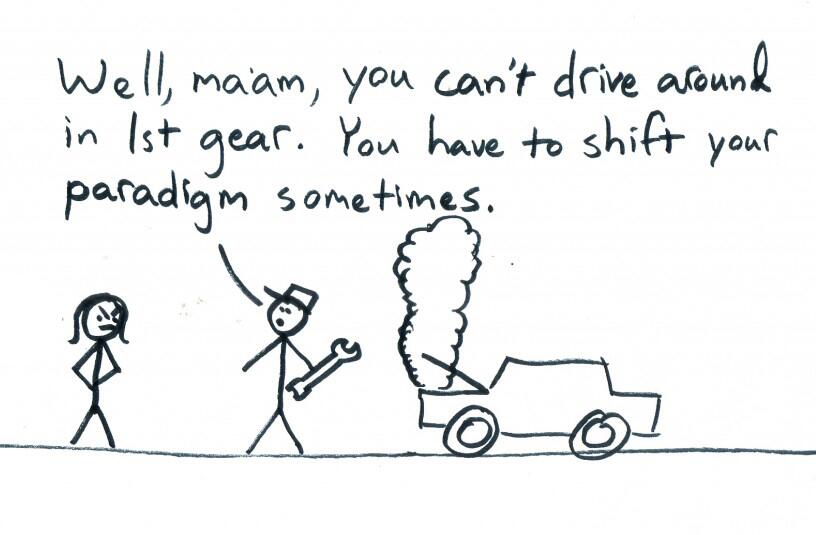 Nobody gets more angry about reference to ‘epiginetics’ than famous biologist Mark Ptashne. The reason is simple. ‘Epigenetics’ is not as harmless as ‘paradigm shift’. In addition to using bad word, it also introduces bad scientific concepts as explained by Dr. Ptashne.

Faddish Stuff: Epigenetics and the Inheritance of Acquired Characteristics

The problem with this characterization is that overwhelmingly, experiments have shown it to be false: histone modifications are not maintained as cells divide. These modifications turn over rather rapidly, and the nucleosomes themselves are too labile to carry information across cell divisions (2,,6). Moreover, there is no plausible molecular mechanism by which a gene that is on could be maintained on by such modifications (7).

Why then do daughter cells tend to mimic their mothers in their states of gene expression? There is no mystery: genes are activated (caused to be transcribed) by regulatory proteins, called transcription factors, which bind to DNA and work on nearby genes (7, 8). Exogenously added genes encoding regulatory proteins can cause somatic cells to change their identities, even forming pluripotent stem cells (9, 10), and the modern study of development entails, to a very large extent, the action of these proteins (11, 12).

Ptashne’s battle against epigenetics is not new. Few years back, he, Oliver Hobert and Eric Davidson rightly questioned about the wisdom of backing large epigenome projects.

Questions over the scientific basis of epigenome project

Those without subscription to nature can read the full letter here.