You all heard the old saying ‘Government is the mother of all invention’, right? You have not? There is a reason such a saying does not exist.

Few days back, we got into a twitter brawl with Michael Eisen after writing DORA Pledge - YASI from Government-funded Scientists. In that article, we argued that centralized government funding is the primary reason for all other distortions, such as impact factor, hyping of ENCODE results, counting number of papers to evaluate scientific contribution, take-over of science by commercial journals and ten thousand other idiocies scientists are frustrated with. If that is true, the best way to solve the problem is to decentralize big grant agencies like NIH and NSF, and make sure the decentralized bodies cannot ‘coordinate policies’.

Dr. Eisen was not happy to hear that. At first, he claimed that before government started to fund science, science was rich, white persons’ hobby.

We gave countless examples of scientists, who all came from modest families and did not have rich parents to fund their scientific hobbies, starting with Robert Hooke. Sure, Hooke became wealthy during his lifetime, but much of that wealth came from his work directly related to his scientific abilities.

His adult life comprised three distinct periods: as a scientific inquirer lacking money; achieving great wealth and standing through his reputation for hard work and scrupulous honesty following the great fire of 1666, but eventually becoming ill and party to jealous intellectual disputes.

Twitter is a lousy medium for intelligent discussion. Among six or seven examples we gave of scientists, who were not rich through family means before being interested in science, Dr. Eisen picked only Francis Crick, mentioned that his work was funded through LMB and claimed victory.

Tremendous Growth in Centralized Government Funding of Science since 1957

What happened in late 50s? Russians placed Sputnik in space. Central planners of Western countries went into overdrive to tell their governments, how wonderful Russian model was.

Twelve years later, NASA successfully sent three persons to moon and Americans felt comfortable about winning the space race. Such comfort was not good news for central planners, who needed new hypes to keep people hooked on to paying for worthless government-funded research. Era of cancer research was born right after moon landing, when Nixon announced ‘war on cancer’ as the next big project for the centralizers. We covered that history elsewhere.

In 16th century, people of England were living dirt poor and their lives improved quite a bit over the following three centuries, even though British government was not running NIH, NSF and other funding agencies. Speaking of science, we got everyone ranging from Newton, Darwin, Maxwell, Dirac during this era. Check our ‘which government agency funded Darwin’s research’ for example. That alone suggested to us that the funding agencies were not necessary for high-quality science. However, while researching on the topic, we came across two fascinating books showing that government funding is outright bad for science. They were both written by Dr. Terence Kealy, who is the Vice-Chancellor of the University of Buckingham, a private university in England. 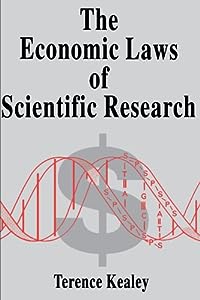 We have not read the books yet, but based on this 1400 word summary by Rafe Champion, the first book appears to be incredibly well researched. We found three points interesting.

1. Contrast between England and France prior to French Revolution

Between 1780 and 1860 the population of Britain tripled from 7.5M to 23M and the real per capita income double in real terms across all classes.

The drivers were increased productivity of machines and the movement of labour from the land (and Ireland) to the factories. The driver of machine technology was NOT science as predicted by the Bacon but the improvement of existing technology by ingenious artisans such as Newcomen, Watt, Trevithic and Stephenson. Amazingly, the scientists were struggling to keep up with the tradesmen! Hooke (the scientist) told Newcomen that his idea would not work while he was developing it (fortunately he persisted) and Carnots work on thermodynamics was prompted by Watts steam engine which could not work according to the laws of science as they were understood by leading scientists at the time.

France followed the Bacon model and set up glittering science laboratories and institutions of learning, while the state ran on the basis of taxes extorted by an army of Farmers-General (tax farmers) working on a commission basis with draconian powers of search, detention and confiscation. Hence the Revolution, while the science laboratories produced scientific advances without any impact on technology or the wealth of the French people.

2. Scientific Discoveries Follows Industrial Discoveries, not the Other Way

In the conventional wisdom of the Bacon model, technological progress is supposed to follow scientific research. Did this happen in the cotton industry. No.

Well what about the steam engine, for many people the symbol of industrialisation? No again.

The first commercial steam engine, Thomas Newcomens, was at work in 1712 at Dudley Castle, Worchestser. It was huge, inefficient and expensive, but it clearly met a need because by 1781 about 360 had been builst in Britan, most of them devoted to pumping water out of coal minesWhence did Newcomen get his idea? The Encyclopedia Britannica has apparently has no doubt. Kealey quotes the encyclopedia as follows:

The researches of a number of scientists, especially those of Robert Boyle of England with atmospheric pressure, of Otto Von Guericke with a vacuum, and of the French Huegenot Denis Papin with vessels, helped to equip practical technologisgts with the theoretical basis of steam power. Distressingly little is known about the manner in which this knowledge was assimilated by pioneers such as Thomas Newcomen, but it is inconceivable that they could have been ignorant of it.

Kealey explains that they were ignorant of those scientific advances that were being made far away, some of them in other lands. Newcomen was a country blacksmith and ironmonger. He knew no science but he knew about the mines and he knew about pumps, pistons and cylinders which were his stock in trade. The principle of the steam engine that he designed was the reverse of the pumps with which he was familiar.

3. Centrally-funded Scientists Turn Mean-spirited and Egotiscal Due to Isolation

There are two reasons for dwelling on Rousseau; the first is to underline his intellectual contribution to collectivism, the second is to show how some aspects of university life and nationalised science feed egotistical, mean and selfish behaviour. He writes that success in biochemistry calls for years of hard work with 60-hour weaks the norm rather than the exception. Peter Medawar told his wife when they married that she had first call on his love but not on his time.

Professional science, therefore, is an isolating experienceNationalisation has aggravated scientists isolation. Under laissez faire scientists have to straddle more than one world. They have to penetrate and understand the worlds of industry or medicine or of charitable trusts. But under nationalisation, scientists need only relate to other scientists. (332)

This artificial, self-referential, government funded system has bred a horrible competitiveness that has helped to destroy science as a civilised activitySuch frenetic competitiveness cannot be blamed solely on the nationalisation of science.It derives from scientists values, which are a mixture of the Jedaeo-Christian desire to make a permanent, individual contribution to society, coupled to a Baconian/Marxist materialism. Thus scientists are obsessed with publishing first: what else do they have?Being pathologically competitive, many scientists just love the State funding of research because it provides yet another forum for recognitionNon-national or specialised funding bodies, which frustrate the scientists need for universal ranking, are now considered second rate. (336-38)

Please keep in mind that some of the above extracts are from the summary text, and the real book should be even more thought-provoking. Guess what the best part about Dr. Kealey is? He is a scientist himself, and taught clinical biochemistry at Cambridge and University of Buckingham for many years before being Vice-Chancellor. In fact, his 2008 book mixes evolutionary biology, scientific progress and centralized funding. If that combination does not make Dr. Eisen happy, we do not know what will.

What is new is that Kealey applies the gimlet eye of evolutionary psychology to his delightful romp through the history of human technological progress.

We sent an email to Dr. Kealey to see whether his views changed, and he was very kind to send us a prompt reply.

I am a researcher in bioinformatics and maintain the blog http://homolog.us primarily discussing bioinformatics, but at times talking about negative effect of government funding in science. I worked for NASA for several years to learn that first hand.

Two days back, I wrote the following commentary -

- and was challenged in twitter by Dr. Michael Eisen, a renowned biologist and the founder of PLOS journal. He claimed that government funding of science is generally good for society despite some level of waste contrary to my experience. He also argued that prior to government funding, science was only conducted by ‘rich white people’. While researching on related topics to write a rebuttal, I came across your excellent books and youtube video.

I am wondering, whether you have recently written anything on the topic, and what your current understanding on the subject is.

Thanks. You are of course right and Michael Eisen (who is an excellent person in many respects) wrong, if only because science is still conducted primarily by rich white (male) people: just look at the pictures of Nobel laureates or of members of Congress. In my recent book Sex, Science and Profits I showed how both the historical evidence (the UK created the Industrial Revolution in the absence of significant government funding for science, and the US overtook the UK around 1890 also without significant government funding for science) and the contemporary economic and sociological evidence, all reveal that governments do not need to fund science, at least not for economic reasons but probably not even for prestige projects such as Big Science. For a concise expansion of these arguments, plse see my recent posting on the The Conversation website.

Every vested interest wants government funded science (the universities and research labs lobby for obvious reasons, as does Business because it loves corporate welfare, as do politicians because they like to think of themselves as renaissance patrons, as does the general public because it supposes - falsely - that science is a public

good) so the dissenting voices are few, but plse point Michael Eisen to Sex, Science and Profits.