‘Fake news’ - step aside. Now we got allegations of ‘fake ancestry’.

Our old-time readers are familiar with Dr. Eran Elhaik’s work on Jewish ancestry. His GPS algorithm mapped Ashkenazi Jews to Northeastern Turkey consistent with the theory that they came from Khazar origin. Irrespective of whether Khazar theory is accepted, his mapping to Northeastern Turkey is real evidence confirmed by other studies (e.g. Rootsi et al. (2013)).

Dr. Elhaik recently wrote a blog post about some disturbing activity going on at 23 and Me regarding its supposedly scientific ancestry reports. His article is reposted below without modification. We like to hear from 23 and Me about its side. Please contact @homolog_us at twitter.

How The Forward shamed 23andme into “fixing” Jewish history

“Telling the truth is less demanding than telling a lie.” ― Eraldo Banovac

To those of you who missed the drama, allow me to start from the beginning. In their latest round of updates, 23andme stumbled upon the Behar et al. (2003) or the later Rootsi et al. (2013) co-authored by Behar and many other scientists that associated the Y haplogroups R1a1 or R-M198 with Near Eastern populations and possibly with the Khazars (given that this was one of the largest conversion events in the history of the region). Here is what Behar et al. (2003) wrote:

One attractive source would be the Khazarian Kingdom, whose ruling class is thought to have converted to Judaism in the 8th or 9th century (Dunlop 1967). This kingdom flourished between the years 700 C.E. and 1016 C.E. It extended from northern Georgia in the south to Bulgar on the Volga River in the north and from the Aral Sea in the east to the Dnieper River in the west—an area that falls within a region in which haplogroup R1a1 NRYs are found at high frequency (Rosser et al. 2000). records migration of Khazars into the Hungarian Duchy of Taskony in the 10th century. The break-up of the Khazar Empire following their defeat by invading Rus led to the flight of some Khazars to central and northern Europe. Although neither the NRY haplogroup composition of the majority of Ashkenazi Jews nor the microsatellite haplotype composition of the R1a1 haplogroup within Ashkenazi Levites is consistent with a major Khazar or other European origin, as has been speculated by some authors (Baron 1957; Dunlop 1967; Ben-Sasson 1976; Keys 1999), one cannot rule out the important contribution of a single or a few founders among contemporary Ashkenazi Levites.

Could Khazaria, I wonder to this day, be the source of Ashkenazi Levite R-M17 Y chromosome?

As with much else of genetic history, there is no way to be sure. […]

I was initially quite dismissive of Koestler’s identification of the Khazars as the “thirteenth tribe” and the origin of the Ashkenazi Jewry. Was this not just another self-aggrandizing Lost Tribe narrative bereft of evidence?

I am no longer so sure. The Khazar connection seems no more far-fetched than the spectacular continuity of the Cohen line or the apparent presence of Jewish genetic signatures in a South African Bantu people. […] I cannot claim the evidence proves a Khazari connection. But it does raise the possibility, and I confess that, although I cannot prove it yet the idea does now seem to me plausible, if not likely.

This line of evidence supports a Near Eastern origin for haplogroup R1a-M582, and hence the Ashkenazi Levite lineage as well.

This is the scientific evidence used by 23andme to make their report. Obviously, no clear cut evidence for a Khazarian origin (no surprise, provided that the Khazars are gone). Instead, there is a strong association with the Near East region (the Caucasus), which allows to make a reasonable speculation of a Khazarian origin, simply because of the historical evidence of their Judaization.

In 2013 I published a study that supported the Khazars theory (Elhaik 2013) over a Judaean ancestry, suggesting that Ashkenazic Jews derived from Near Eastern populations around the first millennium. The conclusions were made based on similar observation to those made by Behar, that is, high similarity of AJs to Caucasus populations.

After the publication of my study, many of the authors of the Behar and Rootsi paper, attempted to refute it, and of course, their own conclusions (Behar et al. 2013). It worked pretty poorly for them as they also mapped Jews to Eastern Turkey, in support of the theory they tried to dispute (see below), but they nonetheless concluded that their findings support a “Middle Eastern origins” (if AJs are from Turkey and Turkey and Israel are in the Middle East – then AJs are from Israel). Discussed here and in (Das et al. 2017).

Note, that these findings do NOT necessitate a Khazarian origin, as we showed in Das et al. (2016) see here. It is more likely that the mass conversion occurred much earlier and south to Khazaria in ancient Ashkenaz, a region we identified in 2016 in northwestern Turkey. The region was under Khazarian control, which creates historical dilemmas that biology alone cannot resolve. In other words, the genetic results for Khazars or Irano-Greco-Turks who converted to Judaism would be indistinguishable. It may be that the latter is more likely, however if you look close, there are about 7% of AJs that are not in ancient Ashkenaz and very close to Ukraine, and again a historical Khazar land. Could they be the descendants of the Khazars or maybe locals who converted to Judaism? With these data, it is not possible to tell. The answer is in ancient DNA, but before we will cover that, let us get back to the 23andme case. 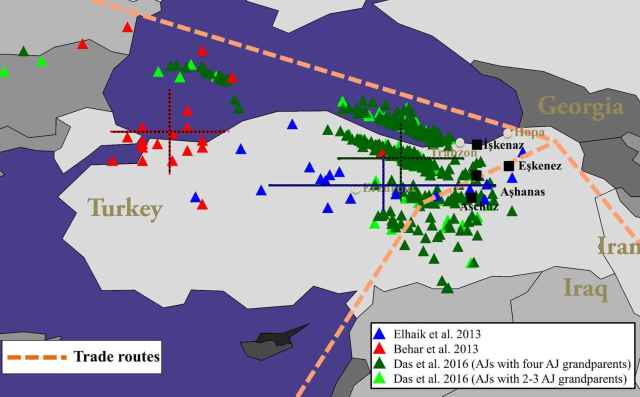 Understandably, the 23andme update was received with confusion. Why? Well, AJs ARE from the Caucasus-Turkish region, as any biogeography analyses done so far indicated (Das et al. 2017) (and see above). GPS Origin results are here. To hide the ancestry of Ashkenazi Jews (AJs), 23andme and almost every company, except GPS Origins, which I developed, simply report “Ashkenazic Jewish” as ancestry. In other words, they tell AJs (and many other non-Jews) that they are AJs, and thus overcome the origin/geography question. So WHERE ARE ASHKENAZIC JEWS FROM? Well, it’s a sort of don’t ask don’t tell type of situation. And it works extremely well thanks to the PR people that these companies retain, or at least worked so well until a 23andme employee stumbled upon Behar’s papers and made the mistake of telling R1a-M582 males that they are Near Easterners AJs. This would make sense for any population, except AJs, where the ancestry is a mask for the geographical origins and created a dilemma… how can a Jew be anything else other than a Jew? There is an ugly word for that. GPS Origins, by contrast, reports geographical origins equally, indiscriminately, evenly, and accurately for all people of all genders and all kinds without fixing the results and certainly without religion affiliation.

Angry 23andme customers quickly wrote The Forward who shamed 23andme and blamed them in no less than:

wading into a political-genetic debate with far-reaching implications for Jewish identity and the Palestinian-Israeli conflict. The Forward

23andme pedaled backward and offered an apology to all the baffled R1a-M582 carriers assuring them that they are not of Caucasus/Khazar origin anymore as Behar and colleagues reported/speculated and The Forward got to hang another skull on its belt. So is this the end of story? Of course not.

Not realizing (or just ignoring the fact) that the 23andme mutation has been reported by Behar and colleagues and not our group, The Forward article linked our work with this 23andme embarrassment. The Forward are huge fans of my/our work. It was hardly a surprise that they butchered the science along the way. In fact, this is their 6th(!) report aimed to discredit our scientific findings concerning the origin of AJs. Unlike 23andme, I choose to stick with the science. Truth does not need publicity, lies do (Abhijit Naskar).

I would also like to remind The Forward of our recent study where Ashkenazic Jews showed practically no Levantine ancestry when compared with ancient DNA from the Levant and the Middle East and only ancient Irano-Turkish ancestry as can be expected of a Caucasus population (Das et al. 2017). It is the #3 most-read article in Frontiers in Genetics (of all times), but maybe they missed it.