To tackle the exponentially increasing throughput of Next-Generation Sequencing (NGS), most of the existing short-read aligners can be configured to favor speed in trade of accuracy and sensitivity. SOAP3-dp, through leveraging the computational power of both CPU and GPU with optimized algorithms, delivers high speed and sensitivity simultaneously. Compared with widely adopted aligners including BWA, Bowtie2, SeqAlto, CUSHAW2, GEM and GPU- based aligners BarraCUDA and CUSHAW, SOAP3-dp was found to be two to tens of times faster, while maintaining the highest sensitivity and lowest false discovery rate (FDR) on Illumina reads with different lengths. Transcending its predecessor SOAP3, which does not allow gapped alignment, SOAP3-dp by default tolerates alignment similarity as low as 60%. Real data evaluation using human genome demonstrates SOAP3-dp’s power to enable more authentic variants and longer Indels to be discovered. Fosmid sequencing shows a 9.1% FDR on newly discovered deletions. SOAP3-dp natively supports BAM file format and provides the same scoring scheme as BWA, which enables it to be integrated into existing analysis pipelines. SOAP3-dp has been deployed on Amazon-EC2, NIH-Biowulf and Tianhe-1A.

View paper at PLOS One

Ruibang requested us to write something original on the paper. We already covered the core algorithm without going into details, and would like to explore the GPU code and write here after he uploads it. Until then, why not have pictures of few authors so that you can recognize them at conferences? :) 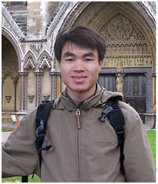